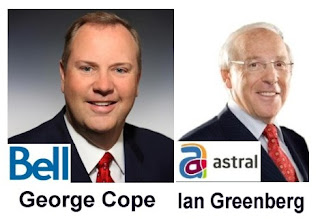 “Bringing together two respected and longstanding Montreal brands, Bell’s acquisition of Astral firmly establishes our company as Quebec’s media leader,” said BCE chief executive officer George Cope.
“Bell is gaining a well-seasoned national Astral management team, dramatically expanding our French-language content, and more than levelling the playing field with our largest broadcast media competitor in Quebec.”
BCE is adding to an already formidable media presence in the wake of last year's acquisition of CTV.
Astral has 2,800 employees across the country, about half in Quebec, and owns many properties, including pay and specialty TV, radio and online businesses.
Astral was one of the few independent media companies, and one of the largest, left in Canada following a round of consolidation that saw most media assets bought up by cable and satellite companies.
Astral's chief executive officer Ian Greenberg had complained before the country's broadcast regulator that the amount of ownership concentrated in the hands of TV service providers had hampered the ability of those independents to negotiate fare rates for their cable channels.
Mr. Greenberg, 69, founded the company with his brothers in 1961.
BCE heralded the proposed deal in a statement, stressing just how big it will be in Quebec.
“The transaction provides multiple other benefits for the Bell team and its strategy, including enhanced control of rising content costs, particularly French-language media, and strong opportunities for cross-platform innovation and advertising packages spanning digital, TV, radio and out-of-home advertising,” BCE said. “Astral products currently represent Bell’s largest single content cost.”
BCE is offering $50 a share for Astra's non-voting shares, and $54.83 for the voting class. Astral shareholders would get about 75 per cent in cash and 25 per cent in stock.
Posted by Said Henry at Friday, March 16, 2012

Said Henry
a savvy follower of the media industry news, the internet convergence and the digital world www.MEDIAinTORONTO.com www.MEDIAinEGYPT.com